Photographer Tim Wikerson was on hand at our Final Dress Rehearsal of Aida last night to take some photos for us, so take a sneak-peek! 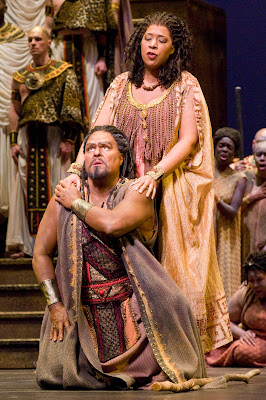 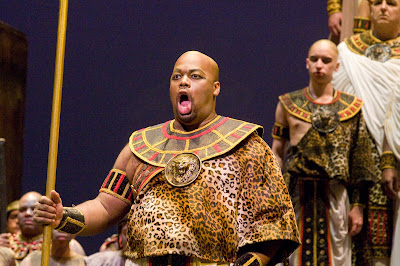 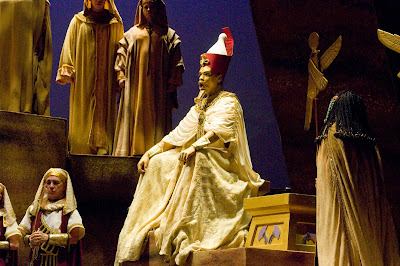 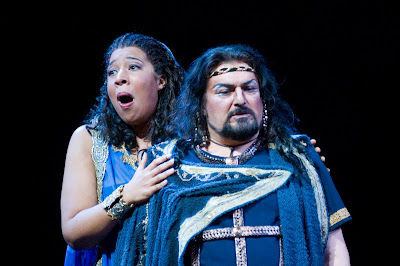 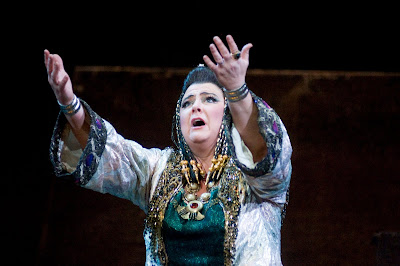 Posted by The Atlanta Opera at 2:49 PM No comments: 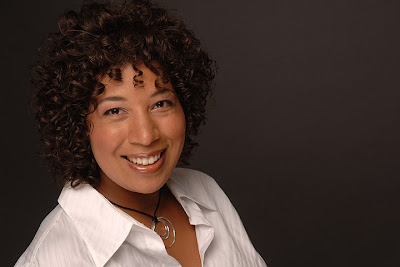 Since Soprano Mary Elizabeth Williams is singing her very first Aida here with us, we want to give you a chance to get to know her a bit better. A resident of Philadelphia (when she's not on the road), Williams answered the following questions for us:
What was your first opera experience?I'm not exactly sure, to be honest. I remember that a group of young opera singers came to my elementary school and put on a show for us, which I really liked--but my parents also liked classical music of all kinds, and took me with them to see concerts and shows from an early age. I was very lucky in that respect. I'm pretty sure the first fully staged opera I attended was I Puritani, by Bellini. I was about 14 years old.

When did you realize that opera was your career?In my opinion, the life of an artist is always in flux, and there are times when I feel more and less like I'm having an "opera career", but I always feel like a singer. I would say that I have been on this particular career path for about 4 years, which is when I moved back to America after living and studying in Paris. I began working with an agent in New York have been gradually finding work ever since.

What has been the biggest challenge in your performance career?There is no proven path to securing a prosperous career as a singer, so we artists need not only to be good performers, but also good businesspeople; it's like owning a business for which you are the product! Learning how to balance the stresses of being an artist while also running my "business" has been a big challenge, but I'm getting better at it every season.


What do you like to do when you're not singing?I love the movies, so when I'm in a new town, the first place I scout out is the nearest movie theater. I'm a pretty good cook, and I like to entertain. I make jewelry, and can be rather crafty (knitting, cross stitch, etc.). I enjoy working out to stay in shape; when it's sunny, I really like to walk around in town and people-watch. Sometimes, I drag my friends to go bowling with me. I'm not very good at it, but it's great fun. I've always loved to read, so I'm always in the middle of some book or another.

If you were not a singer, what would you be?
When I was a kid, I wanted to be the Chief Justice of the Supreme Court, but I have since reconsidered the advisability of that plan! Sometimes, now, I daydream about being a jeweler. I LOVE jewelry—especially semi-precious gems. I also think I'd like to work in the magazine business as a writer or editor.


You have to travel a lot in this profession. What has been your best travel experience?They have all been pretty good, to be honest. I have managed to find something fun and interesting in every place I have ever been for work. Most recently, I had a very fun trip to Poznan, Poland. I sang just one concert, so I was there for only 5 days! It was a quick trip and the jet-lag was horrible, but I enjoyed walking around in the city and practicing my pitiable Polish on the shopkeepers. It was great fun, and very beautiful.
Posted by The Atlanta Opera at 11:06 AM No comments:

The Atlanta Opera's production of Aida opens this Saturday (we're so close!), so we want to share some photos from staging rehearsal: 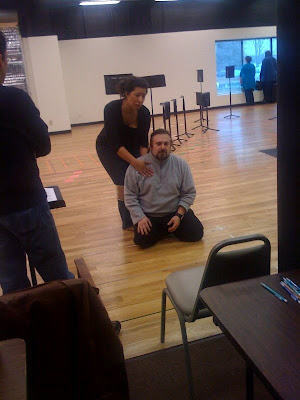 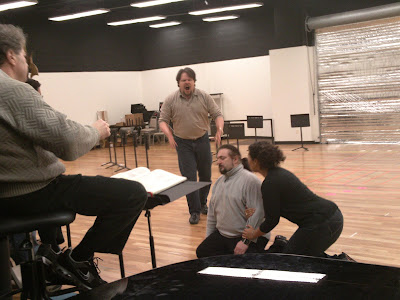 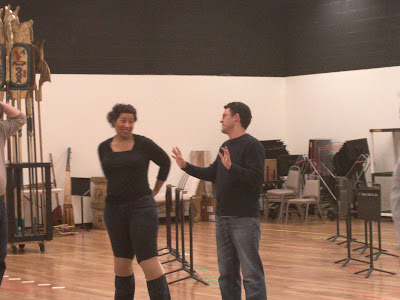 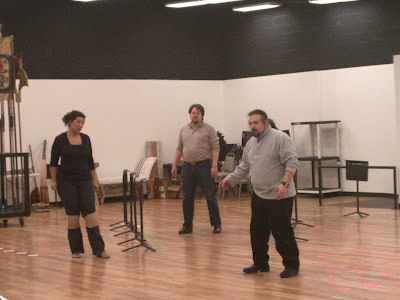 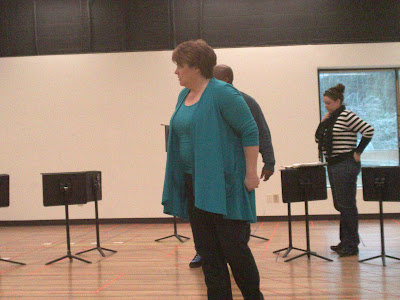 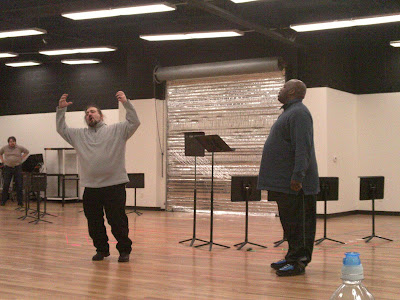 If you're wondering about some of the emotions behind these photos, check out our Aida Opera Guide to learn about the characters (and the love triangle!) of Aida. This guide also includes some great information on composer Giuseppe Verdi and some interesting Aida facts.

Posted by The Atlanta Opera at 2:38 PM No comments:

Atlanta native bass Morris Robinson-who is making his Atlanta Opera debut as the high priest Ramfis in our production of Aida-taped a great interview with WSB's Scott Slade earlier today. The interview will air on the radio later this week, but we've got a sneak preview for you. Take an afternoon break, and enjoy listening!

Morris Robinson WSB Interview
Posted by The Atlanta Opera at 4:41 PM No comments:

This past Sunday, soprano Mary Elizabeth Williams sang during the morning service at First Congregational Church of Atlanta, and we've got a short video for you to watch:

Thank you to First Congregational for inviting us, and thank you to Mary Elizabeth Williams who was so gracious (and even helped us sell some tickets!).
Posted by The Atlanta Opera at 1:40 PM No comments:

We had a great time at our Opera Chat last night! 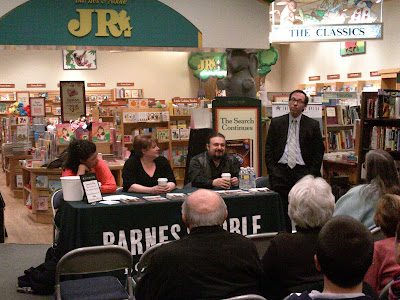 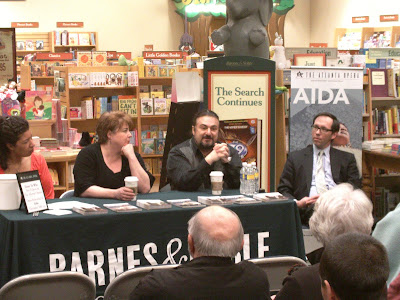 Posted by The Atlanta Opera at 11:07 AM No comments:

Here at The Atlanta Opera, we’ve been gearing up for our next production, Verdi’s Aida, and we want to make sure you know about all the related—and FREE—events that will be taking place over the next few weeks.

Join us for an informal conversation with soprano Mary Elizabeth Williams, tenor Antonello Palombi, and mezzo-soprano Elizabeth Bishop from The Atlanta Opera’s upcoming production of Aida. Gain inside information on The Atlanta Opera production, rehearsal process, and life as an artist. Hosted by Eric Mitchko, Atlanta Opera Director of Artistic Administration. This event is free and requires no reservation.

Led by longtime opera connoisseur and Honorary Board Member Carter Joseph, Opera 101 is a prep course for the upcoming production of Aida. Patrons are introduced to the history, background and story line of the opera. The composer, librettist, key characters, musical theme and selected arias are featured in an entertaining and interesting multi-media presentation. This event is free, and reservations are required by calling 404.881.8801.

Mezzo-Soprano Elizabeth Bishop—Amneris in The Atlanta Opera’s production of Aida—will lead this exciting master class. This event is free. Visit www.music.gsu.edu or call 404.413.5901 for more information.

Also, be sure to bookmark our handy calendar; it’s a great way to keep up with upcoming events!
Posted by The Atlanta Opera at 2:15 PM No comments:

Welcome to The Atlanta Opera’s brand new blog! We’ll be posting several times per week with news, photos, and more, so be sure to check back soon.

To open this blog, we want to share our recently announced 2010-2011 season, which will be our fourth in the Cobb Energy Performing Arts Centre! In an effort to remain fiscally responsible during these tough economic times, we’ve scaled back to three productions, so we’ve made sure that our three choices all have great audience appeal, for opera aficionados and novices alike. This new season features Puccini’s beloved La bohème, Gershwin’s American classic Porgy and Bess, and Mozart’s funny and poignant Così fan tutte.

This incomparable opera classic tells the tale of six penniless artists full of idealism, beauty and unbridled love. Their harsh encounter with the realities of life is heart-wrenching—don’t forget to bring tissues.

Italian soprano Grazia Doronzio and tenor Bryan Hymel star as Mimi and Rodolfo, the ill-fated lovers. Doronzio is a recent graduate from the Metropolitan Opera’s Lindemann Young Artist Development Program, and New Orleans native. Hymel (pronounced “ee-mel”) is the Top Prize Winner of the 2009 Gerda Lissner Foundation Competition. Be sure not to miss great young artists in this ever-popular classic opera as we expect the two weekends of performances to fill quickly!

Set in Charleston, Porgy and Bess depicts the people of Catfish Row struggling with hard work and tough times and yearning for a better life and great love. Porgy and Bess features some of the most popular tunes in opera including the lullaby “Summertime.”

Why this production is a must-see: Boston Pops conductor Keith Lockhart in his Atlanta Opera debut, Atlanta native baritone Michael Redding as Porgy, and The Atlanta Opera Chorus. The Chorus, which is prominently featured in Porgy and Bess, received such great attention after The Atlanta Opera’s 2005 production that Paris’ Opéra-Comique commissioned them for a European touring production during the summer of 2008! 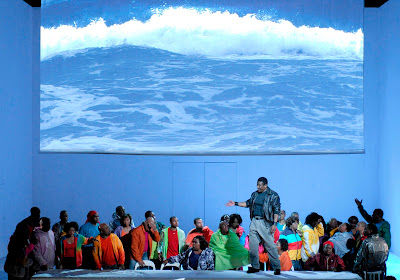 Mozart’s brilliant masterpiece tells the story of two officers who boast of their girlfriends’ faithfulness, only to have a clever friend put it to the test. Disguises, charades, mischief, and heartbreak result, but in the end, all are much wiser in the ways of love.

This production includes a cast of great up-and-coming artists! Soprano Kiera Duffy and tenor Matthew Plenk (Così’s Despina and Ferrando, respectively) are both featured in the Metropolitan Opera’s behind-the-scenes documentary, “The Audition.” “The Audition” follows the dramatic final week of the Metropolitan Opera's 2007 National Council Auditions and is a great chance to get a rare behind-the-scenes look at what it takes to become an opera star!

Read up on the documentary here, and check out this preview (be sure to look for Kiera!):

For more details on our 2010-2011 season—including casting and ticketing details—be sure to visit our new and improved website.
Posted by The Atlanta Opera at 11:22 AM No comments: