Recently, The Atlanta Opera was awarded a generous grant by the Zeist Foundation in support of the Student Shorts program. The grant covers direct expenses for the special student performance of Carmen. Approximately 1,200 Atlanta Public School students will attend the Student Short production of Carmen at no cost.

This season, The Atlanta Opera will be producing an abridged version of Carmen, the story of a captivating gypsy who falls in love with a young toreador, only to find herself victim to the hands of jealousy, vengeance and tragedy. This 70-minute performance is complete with authentic costumes, a full chorus, The Atlanta Opera Orchestra.

First produced in 2003, Student Shorts was targeted for students as its primary audience. The purpose of Student Shorts is to introduce young opera-goers to the magical world of opera, and expose them to performance in a live setting – the costumes, live orchestra, singers, and lighting design. Each year the audience varies, depending on the theme and content of the upcoming production.

Usage of any images on this blog is restricted to The Atlanta Opera and approved news websites. Any other usage, particularly for professional purposes, must have written permission. For additional information, please contact The Atlanta Opera's Marketing Department at 404.881.8801.
Posted by The Atlanta Opera at 3:02 PM No comments:

A View From the Bleachers: Getting a Taste of Liquid Culture from An Audience Perspective

On Monday, July 30th the collaborators of Liquid Culture, a series of public events spearheaded by Lauri Stallings and gloATL, met at the Sandler Hudson Gallery to initiate a community dialogue exploring the role of public art, and their recent production at Sol LeWitt’s 54 Columns.

The Atlanta Opera was invited to participate in this series of what Lauri Stallings called “installations,” or “utopia stations.” This was an experimental collaboration to introduce new audiences to the world of opera. Facilitated by Andrew Alexander of Creative Loafing, the community dialogue was led by the creative visionary, Lauri Stallings, and Atlanta Opera Communications Manger, Laura Soldati, who discussed the evolution of Liquid Culture and how non- traditional forms of dance and opera can be presented. GloATL dancers and Atlanta Opera singer, Megan Mashburn, shared their experiences as performers, and personal feelings on this particular way of presenting their art forms. 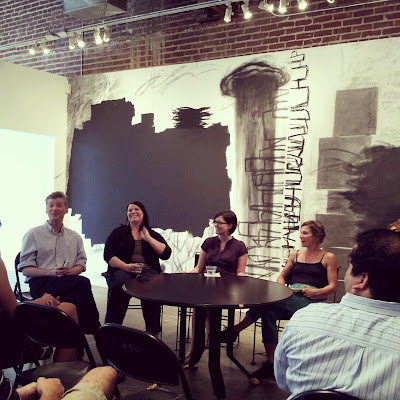 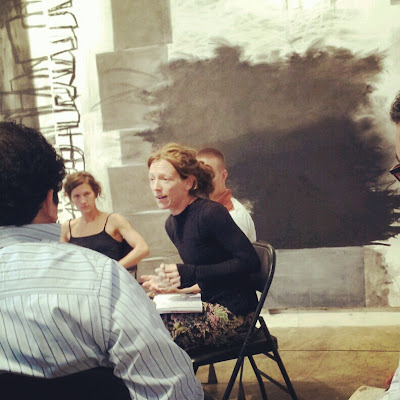 As the Atlanta Opera’s newest marketing and communications intern, and a young lady with limited exposure to modern art, watching Liquid Culture for the first time was an emotional whirlwind. The dancers were wearing the same costumes, beige leotards and platinum wigs, and the singers were wearing white, in order to maintain uniformity. The purpose of everyone wearing neutral colors was to replicate the pillars at 54 Columns. The dancing was typical of Lauri Stallings’ choreographic style - uneven and gestural with random spurts of energy. Moments into the dancing, opera singers emerged from different areas of the crowd. The beautiful harmonies and melodies juxtaposed perfectly against the backdrop of gloATL’s stylized dancing. 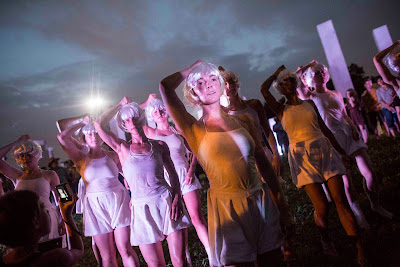 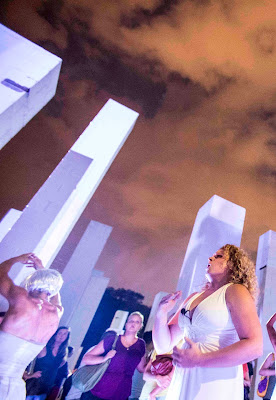 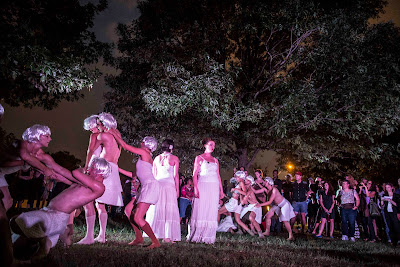 Liquid Culture’s unconventional performance gave audience members the opportunity to consider a concept unlike traditional formats of dance and opera. Setting the scene in a public landscape allowed members of the crowd to participate in a “360 concept,” and walk alongside the performing dancers and opera singers. Collaborating with Lauri Stallings and gloATL, The Atlanta Opera showed the public how opera can be enjoyed by all walks of life. 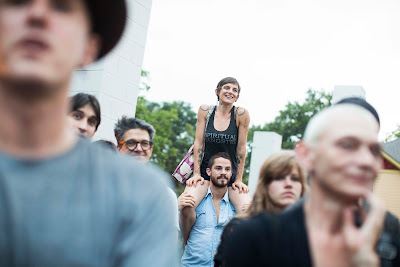 Interested in seeing more perspectives? Here are other views from the bleachers.

All images courtesy of Jeff Roffman

Usage of any images on this blog is restricted to The Atlanta Opera and approved news websites. Any other usage, particularly for professional purposes, must have written permission. For additional information, please contact The Atlanta Opera's Marketing Department at 404.881.8801.
Posted by The Atlanta Opera at 1:23 PM No comments: