A Photo Essay of the World’s Most Dysfunctional Relationship

On Saturday, November 10, The Atlanta Opera opened its 2012-2013 season with Carmen, Georges Bizet's timeless tale of a love triangle gone horribly awry. In case you have not seen it, or to refresh your memories, here is a photo essay that recounts Carmen's final days. Oh, the drama... 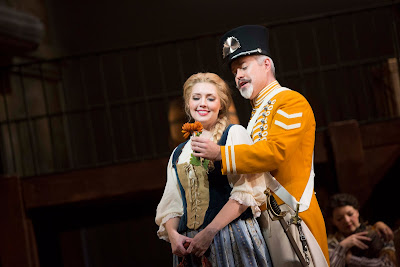 Micaëla (Melissa Shippen) enters Act I searching for her fiancée Don José. Resting outside the guardhouse with his men, Corporal Moralés (Scott Hogsed) charms the young girl with a flower. 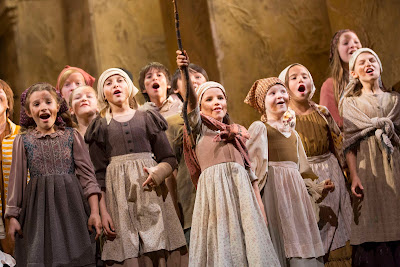 The children of Seville cheer at the arrival of the brave toreador, Escamillo. 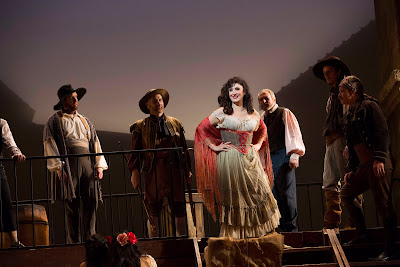 As the midday bell rings all eyes fall on Carmen (Maria José Montiel ) as she makes her entrance outside the cigarette factory doors. The men are spellbound by her beauty and flirtatious demeanor. 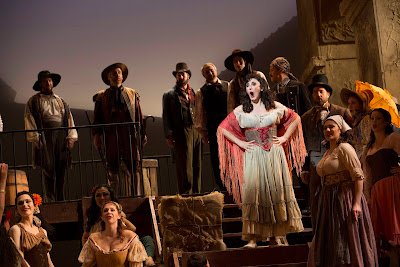 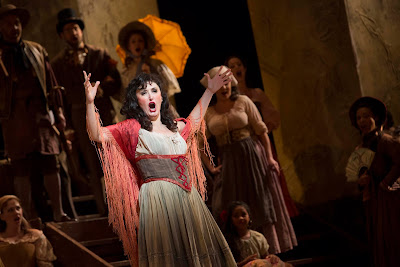 Enchanting almost all with her singing of “La Habañera,” Carmen catches the attention of soldier Don José (Fernando de la Mora) as she throws a rose at him before returning to the factory. 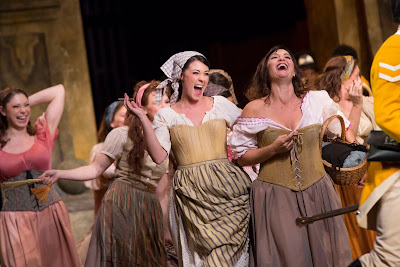 The cigarette factory girls laugh together as they and Carmen tease the guards standing on duty. 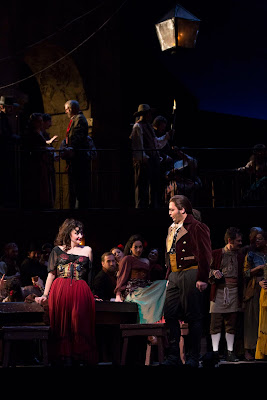 After a dramatic torchlight procession announcing the arrival of Escamillo (Aleksey Bogdanov), Carmen flaunts herself before the others, and attracts the handsome toreador. Carmen maintains a remote façade and refuses Escamillo’s advances. 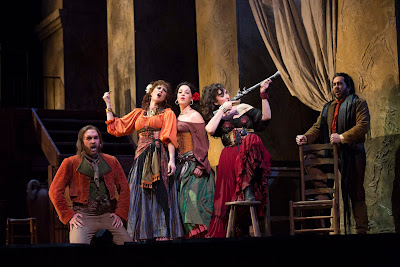 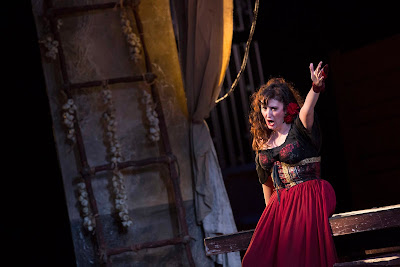 Shortly after dancing the flamenco, Carmen convinces her lover Don José to stay with her, and ignore his orders to return to the barracks. The retreat sounds, and Carmen hopes Don José will follow her into the mountains to Lilla Pastia’s tavern. 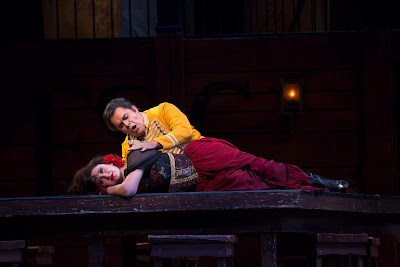 Doomed lovers, Don José and Carmen, lay down and embrace in despair, wishing there were a way they could be together. 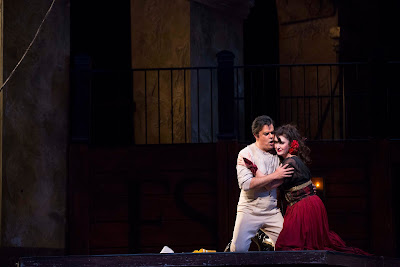 Carmen pleads with Don José to ignore the bugle and flee with her and the other gypsies into the mountains. The lovers desperately cling to one another. 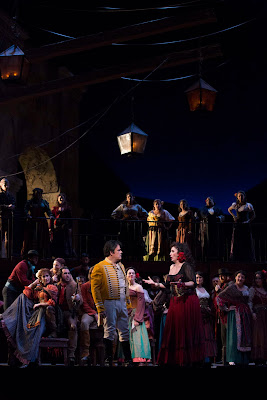 Carmen welcomes Don José to her tribe of gypsies and smugglers. Don José begins his transition from soldier to smuggler. 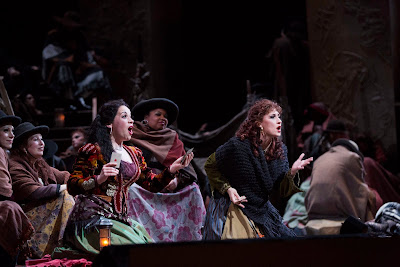 Gyspsies, Frasquita and Mercédès, read their own good fortunes and dream about what their futures will bring. 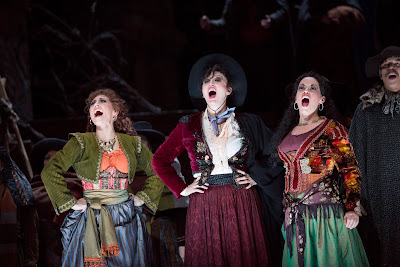 Mercédès, Carmen and Frasquita sing after having had their fortunes read. 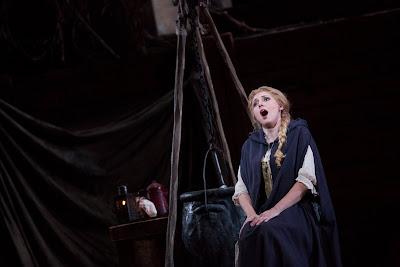 While Don José abandons the army to join Carmen and the smugglers, Micaëla wanders through the mountains looking for her lost fiancé. She hopes Don José will come back to her after sharing the news of his sickly mother. 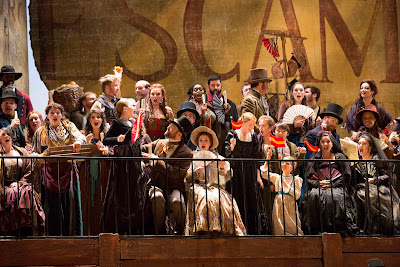 A large crowd assembles in the stands as they await the famous Escamillo at the bullring. 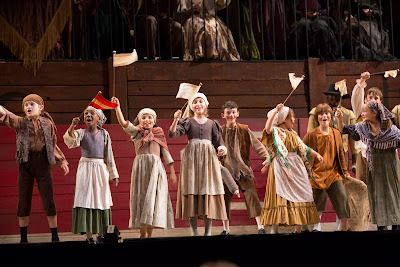 In a bullring in Seville, children wave flags cheering at the entrance of the famous toreador, Escamillo. 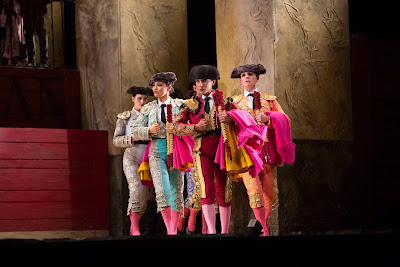 The colorfully decorated flamenco dancers, transformed into toreadors, perform in the arena prior to Escamillo’s entrance. 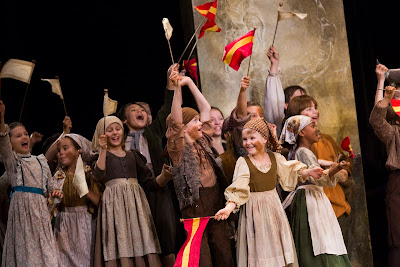 Children standing in the bullring arena sing and yell in excitement as their hero, Escamillo, makes his grand appearance. 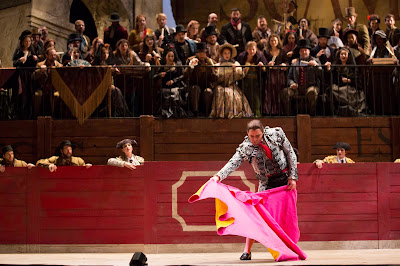 The wildly popular Escamillo entertains the crowd as he lures a bull into the arena. 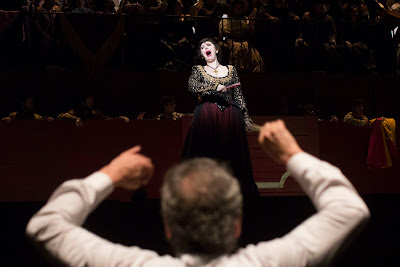 In the final scene of Act IV, Carmen refuses Don José and tosses his ring. Then, she sings her last words.

Tickets are availabe at atlantaopera.org.


All photos are courtesy of Jeff Roffman Photography, LLC.

Usage of any images on this blog is restricted to The Atlanta Opera and approved news websites. Any other usage, particularly for professional purposes, must have written permission. For additional information, please contact The Atlanta Opera's Marketing Department at 404.881.8801.
Posted by The Atlanta Opera at 12:33 PM No comments: