Bass Kevin Burdette is currently appearing as Stobrod/Blindman in Cold Mountain at Opera Philadelphia, but he'll be with us soon to start rehearsing his role as The Pirate King in The Pirates of Penzance, opening March 5th. We sat down with the "Robin Williams of opera" to pick his brain about preparing for the role, Gilbert and Sullivan's influence, and his thoughts on Queen Victoria.
Did you grow up going to the opera? 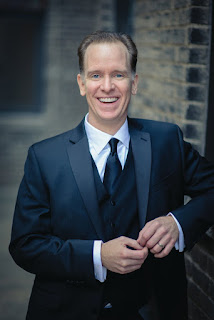 I grew up around classical music and went to a lot of orchestra concerts and musical theater (in fact, I played viola in the Knoxville Youth Symphony Orchestra starting in 7th grade and performed in school and church musical theater earlier than that), but I didn’t go to the opera until I was in high school – a performance of Don Giovanni, and I’m embarrassed to say that I fell asleep in the second act! One of the singers in that show was the wonderful Phil Cokorinos, with whom I have since sung, in The Nose at the Metropolitan Opera (I never told about my dozing off…).
Do you remember the moment that captured your interest in music and singing? Was there a particular artist that influenced you?
I am not certain there was a specific moment that captured my interest – it was more like the confluence of a lot a separate moments: sitting backstage, while in the chorus of The Marriage of Figaro, listening to the Countess singing “Dove sono,” and being struck by opera’s unique ability and power to move a listener in moments of a character’s vertical development and looking within; sitting in rehearsal of La traviata and getting overwhelmed by the beauty and sorrow of the final act (especially from “Addio del passato” to the end). Everyone in the room that afternoon, from the director, conductor, diction coach, on down, was bawling at the final chord, moved by a transcendent moment only opera can provide.
As for artists who influenced me, I was extremely fortunate to have cut my teeth in opera at the New York City Opera – I started there while still in grad school and performed over 100 times with the company over the subsequent decade or so. The roster of New York City Opera when I was there was full of the great American singing actors of that time. I performed with, and learned from, singers like Bob Orth, Joyce Castle, Lauren Flanigan, Mark Delevan, David Daniels, Bill Burden, Elizabeth Futral, the list goes on and on.
Also, I would be remiss not to mention one other singer who shaped my career profoundly: Paolo Montarsolo. When I was a young artist in Paris, I had the honor of working with Paolo on a production of The Elixir of Love. Dulcamara was one of Paolo’s great roles, and we worked extensively for weeks on my interpretation of that role. That work was invaluable and laid the foundation for the work I do now as a singing actor.
How have you prepared for the Pirate King, both as a vocalist and an actor?
I have had the good fortune of being in The Pirates of Penzance multiple times now, so I am very familiar with the piece, having been around so many rehearsals and performances of it. My preparation, therefore, has been relatively straight forward: diving first into the words to make sure I am comfortable with them and where they are going, and then adding in the music. The lyrics are extremely clever, and the musical setting varies among funny, beautiful, moving, and rousing moments. The best thing to do, for me, is simply to honor the source material by learning it, repeating it, trying to find every bit of wisdom Gilbert and Sullivan added, and then doing it again.
It helps, of course, to know that Seán Curran will be waiting when we arrive in Atlanta. Seán is one of the funniest and cleverest people in opera, and it is extremely comforting to know that we, and the operetta, are in his incredibly capable hands. Basically, I am just looking forward to having fun!

You’ve performed so many kinds of opera. How does Gilbert & Sullivan differ from the traditional works and contemporary pieces you’ve sung?
In some sense, Gilbert & Sullivan does not differ much from the traditional works and contemporary opera I have performed. Opera, to me, is all about telling the story – and G&S write as good of a story as anyone. There are twists and turns, to be sure, but part of telling the story is not anticipating those turns and simply being in the moment when they occur.
Of course, Pirates is a comedy, so in that sense, it is different from Everest or Cold Mountain or La bohème. It’s not too far removed, though, from a Daughter of the Regiment or an Elixir of Love, as far as I am concerned. Donizetti was a genius at writing music that allows for the humor of a text or of a situation to come to the fore, and Sullivan was much the same. Dulcamara’s opening patter aria in Elixir has a lot in common, I think, with the Major General’s opening aria in Pirates. And just like with Marie and Tonio in Daughter of the Regiment, the audience connects with Frederic and Mabel and is genuinely delighted when they find a way to be together.
What is your favorite moment in The Pirates of Penzance?
Oh, it’s so difficult to name one. Thinking of that silliness I referenced, the “ ‘often, frequently’ only once” exchange is epic – so funny. And the Major General’s opening aria is one of the funniest pieces of music ever written.
Perhaps best of all, though, are the moments of pure beauty that emerge from the topsy-turvy world. I cannot imagine a more beautiful moment than the duet between Frederic and Mabel in the middle of “Stay, Frederic, stay”: “”Ah, leave me not to pine alone and desolate…he loves thee, he is here,” followed by Frederic’s “Ah, must I leave thee here in endless night to dream…he loves thee, he is gone.” It is a heartfelt text, gorgeously set: in 3/4, with a hemiola midphrase and a stunning top G on “loves” – as beautiful as anything in the repertoire.

And finally: Queen Victoria, overrated or underrated?
The Pirate King MUST answer that the Queen is underrated – for all our faults, I love the Queen!

Usage of any images on this blog is restricted to The Atlanta Opera and approved news websites. Any other usage, particularly for professional purposes, must have written permission. For additional information, please contact The Atlanta Opera at 404.881.8801.

Posted by The Atlanta Opera at 2:47 PM No comments: